TechCrunch is one of the world’s leading online resources for tech news, covering everything from tech innovation, new products and the world’s hottest startups. Founded in 2005, the tech powerhouse, along with associated sites such as CrunchBase, now boast over 12 million unique visitors each month. Last week, TechCrunch interviewed our Zesty Cofounder Lloyd Price to find out more about how the company has grown over the past year and what Zesty have in store for the future. Read on for the full article…

U.K. healthcare startup Zesty, which much like ZocDoc in the U.S. offers an online platform to locate and book healthcare appointments at short notice, has topped up its seed investment with more than $2 million in new funding coming from two new VC firms, TA Ventures and ABRT Fund.

Zesty’s prior seed was secured back in January 2013, led by Mangrove Capital. The size of that round has not been disclosed.

Zesty’s service, which launched in beta in London back in May 2013 focusing initially on the private and NHS dental market as a way to test the business model, lets users locate free appointment slots nearby, by searching for a postcode or a particular London district; read reviews of the healthcare providers; and book an appointment. It also sends out email confirmation and SMS appointment reminders. 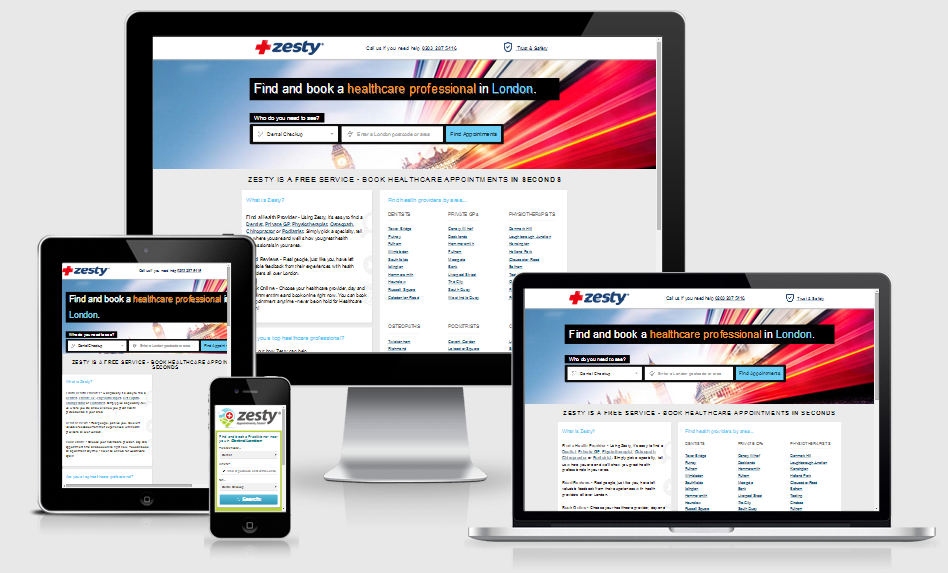 It currently has “thousands” of users, and more than 2,000 healthcare providers signed up to offer bookable services, with around 1,000 live appointments up for grabs on Zesty at any one time, says co-founder Lloyd Price.

Obviously appointment availability is fluid, with supply and demand in the driving seat. Monday is apparently the busiest day for Zesty usage.

In the U.K. Zesty competes with Passion Capital-backed dental e-booking service Toothpick, however Zesty’s focus is broader — with dentistry only one of the healthcare markets on tap. Its service currently covers six healthcare markets in London — namely: dentistry (private and NHS); private GPs; physiotherapy; osteopathy; chiropractic; and podiatry. It calculates the U.K. dental market alone is worth circa £8 billion annually.

But its ambition is grander still: it’s aiming is to scale up to 25 healthcare markets — which is one of the core reasons it’s taking in the additional funding, says Price — with the intention of covering everything primary care-related, from nutrition to acupuncture to (even) homeopathy. All those other markets (excluding dentistry) comprise around £24 billion annually, he says.

Zesty is also intending to target NHS doctor appointments too, but to do so it needs to go through a lengthy approval procedure to get access to the U.K. National Health Service’s own e-booking software, Choose and Book.

“It takes around about 12 months to get approved,” says Price. “We’ve started working with them about six months ago. We’ve worked with NHS Choices, so we power a lot of NHS dental pages on NHS Choices. We’ve just sponsored an NHS hack day. And we’re talking to NHS Choose and Book so that’s probably a 2015 play for us.”

Zesty also intends to expand its service from London to the whole of the U.K. Although rolling out beyond London is likely to be a gradual process, says Price, with the team intending to go city by city to sign up enough healthcare providers to switch the service on in each new area.

The rollout strategy is likely to focus on adding other large metropolitan areas with a glut of healthcare providers first, he adds. Zesty will be in the market for a Series A round — likely around Christmas this year, according to Price — in order to fund that U.K.-wide rollout.

Zesty’s platform works by either tapping into an existing healthcare provider’s own practice management software, using their APIs. Or, for smaller practices which might only be using software such as Google Calendar or Outlook, it offers b2b tools to get an online booking system up and running. And for the smallest practices and practitioners who are still managing customer appointments on paper, it can provide a click-through link they can add to their website to enable customers access its online appointment booking facility.

“The hardest part is simply educating the market, setting them up with our systems, training the receptionists. That takes a bit of time. But once we do that it works very well,” says Price. 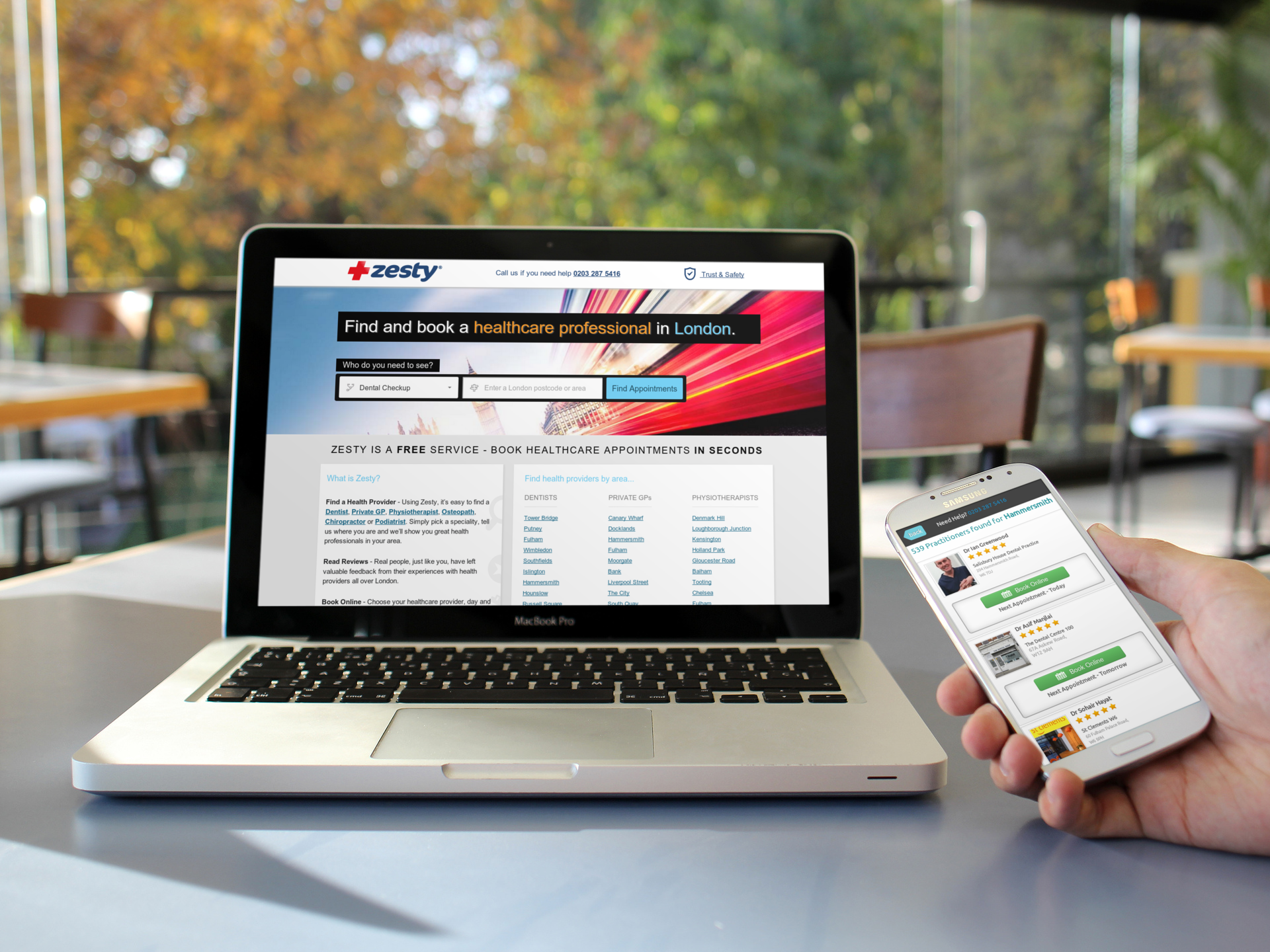 The speed with which people can locate and book healthcare markets is a key USP for Zesty, according to Price, along with the ability for people to both locate a service and book it on the same platform — which he says sets Zesty apart from directory services like Yell.com.

There’s also the convenience angle, with the platform offering an on-demand marketplace of healthcare related services — provided the user is willing to travel a little outside their immediate local area, they’ll be able to track down an appointment at a time that suits them, says Price.

Another user advantage — vs just doing a Google search – is the platform’s support for highly granular or specialist searches, with Price saying the intention is to enable users to conduct very niche searches relating to healthcare, such as finding a German-speaking dentist, for instance, or a particular clinic that’s open on a Sunday.

“What this funding round will enable us to do is to build — effectively — a search engine. When you go to Zesty now you can type in a postcode, you can search by treatment type. But what we want to do in the next version of the site is we want to do it by speciality and also by filters, so you can say I’m looking for a German-speaking pediatrician to see my daughter.”

“Our vision is very much this kind of Expedia, TripAdvisor model, where you can just filter and filter,” he adds. “It’s about empowering the user, empowering patients.”

From the healthcare provider point of view Zesty offers a platform to improve discoverability and for listing and monetizing unfilled appointments. It generally charges £12.50 per appointment booked via its platform, plus a £99 on-board set up fee. Although, for NHS dentists, it’s only charging an annual £99 fee, since the relatively lower cost of a dental check-up on the NHS makes the appointment fee a bit steep for that particular healthcare market.

As well as helping healthcare practices fill appointments that might otherwise go unfilled and monetize last minute cancellations by offering them the ability to relist appointments and have people take them up at short notice, Price argues Zesty is also offering providers a way to reach new types of customers, such as younger users, who may not have located the service if they weren’t able to search by location, book online and bag an appointment at a time that really suits them.

In other words, it’s healthcare services for the on-demand generation. That said, the current user “sweet-spot” for Zesty, in terms of user demographics, is 40+ women, according to Price.

Another strand of the business it’s currently building out is an analytics platform so it can provide insights back to its business users to give them an understanding of patterns of user behaviour or the ability to spot healthcare trends in particular markets.

So, for instance, a practice could decide whether there is enough demand for it to offer an IVF service, based on the local services people are searching for. Or tweak their opening hours to better mesh with what people in the local community are after.

Beyond the U.K., Price says Zesty sees potential for its model in other Western European markets, especially those with the highest propensity of private healthcare — such as Holland, Sweden, Norway and Denmark, rather than (at least initially) markets such as France, Italy, Spain and Germany.

“Our vision is London, the U.K. and then let’s go to Europe,” adds Price. “In 1999 I was at Kelkoo, and that’s exactly the model we did. It launched in France, came to the U.K., then it went to Norway, Sweden, Denmark, and then basically just tied up the whole of Europe in 11 different markets. So having gone through that… I totally see that possibility.

“My attitude is, wherever it’s a Latin-based language this is going to work very well. You need to go to the supermarket, you need to go to the doctor, these are everyday problems. It doesn’t matter whether you are in the South of France, if you’re in Berlin, if you’re in Glasgow, if you’re in London, it doesn’t matter. It’s access to healthcare, so everybody’s the same, everybody needs to see a doctor or a dentist. We don’t see any barriers to scaling this, to growing.”

If you have any questions about this post or any other blog post, please email hello@zesty.co.uk or call 0203 287 5416, we would be happy to help